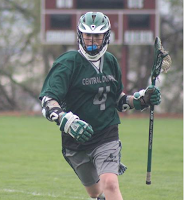 
Lancaster Country Day/Lancaster Catholic entered Saturday’s boys’ lacrosse game with a scrappy attitude, but was unable to notch its first win against a solid team in Central Dauphin, falling to the Rams 16-4.
The Cougars are working with a new offensive scheme this season under first-year coach Zach Lombardo.
The first half was highlighted by Central Dauphin's stout defensive play and excellent ball movement on offense, stifling any offensive momentum by Country Day and keeping the pressure on the Cougars’ defense.
Country Day (0-3) was plagued by penalties in the first half, which kept some of its more experienced defensemen off the field.
MORE AFTER THE BREAK
Turning point: On a dreary , rainy morning, Central Dauphin (2-2) came out determined to control the ball and establish a lead early.
The Rams scored seven unanswered goals in the first half and never looked back.
Star of the game: Some key goals and an assist early on by Central Dauphin's Nick Koussis helped to kick-start a dominant offensive performance by the Rams.
Relentless defense was also an integral part of this victory for Central Dauphin with solid play from defenseman Matt Strickler and Jason Roberts, as well as some resolute work in goal by Noah Johnson.
Key statistic: Lancaster Country Day had trouble clearing the ball at times and setting up an offensive attack. As a result, Central Dauphin was able to capitalize on a handful of goals in transition. Out of the 16 goals by Central Dauphin, six of them came in transition.
Up next: Lancaster Country Day will be traveling to Denver to battle Cocalico at 4 p.m. Tuesday. The Eagles (1-3) will be looking to bounce back after a 12-3 loss to Twin Valley.
Quotable: "In the second half we kind of picked it up a little bit, but we've got a lot of work to do, and with this new system these guys are learning on the fly and faced a really good team today. We know what we have to do and what we have to adjust, we're looking forward to making improvements and seeing how our guys respond" — Cougars coach Lombardo.
Posted by HBGLAX at 11:20 AM